Individual or Team-Based Incentives? When to Use One, the Other … or Both

Over the past two decades, organizations have increasingly come to rely on teams to produce the lion’s share of business value (DeMatteo et al., 1998;  Ladley, Wilkinson & Young, 2015;  Ali, Fuenzalida, Gomez & Williams, 2021). Twenty-five years ago, only two-thirds of firms reported that 20% or more of their workforce were engaged in one team or more at any given time (Lawler et al., 1995).  Today, teamwork and collaboration consume about 80% of the typical knowledge worker’s day (Wright, 2018).

Though most employees agree that team-based work is essential, only one-quarter prefer to work in teams versus alone, and, as of 2016 (before the Covid-19 pandemic complicated matters further), 68 percent say the teams they work on are dysfunctional (University of Phoenix, 2013; Cross, Rebele, Grant, 2016; van der Lippe & Lippenyi, 2019; Alexander, De Smet, Mysore, 2020). This points to a critical disconnect. If a large part of organizational success hinges on teams, yet teams are broken, intervention is essential.

“As business becomes increasingly global and cross-functional, silos are breaking down, connectivity is increasing, and teamwork is seen as a key to organizational success. According to data we have collected over the past two decades, the time spent my managers and employees in collaborative activities has ballooned by 50% or more.” – Rob Cross, Reb Rebele and Adam Grant, HBR, 2016

Incentive program designers have an important role to play in helping firms reward and recognize workers in ways that lead to better-functioning teams (Cross, Rebels and Grant, 2016). Like most other reward design, the practice of optimal incentivization of teams is not immediately obvious or intuitive. The type of work teams perform ranges widely and can change over time. For incentives to do good rather than harm, they should encourage the types of actions and behaviors appropriate to the work of the team in question – the right incentives at the right time. Leaders and reward program designers should first determine whether the work of the team is highly-interdependent (tight team) versus loosely dependent (loose team).

While leaders and organizations desire greater collaboration and better teams, they tend to emphasize individual achievement when it comes to compensation, promotions, rewards, and recognition (Kerr, 1975; Ladley, Wilkinson & Young 2015). Leaders may favor incentives and rewards aimed at individual effort and outcomes because they are comparatively easier to measure and administer. Yet individual rewards might contribute very little to team dynamics and performance, or even detract from them. For example, the crucial hubs in high-performing teams – people who sacrifice personal achievement to assist team members – will rarely qualify for individual rewards. Organizations that overlook and/or discourage these crucial connectors (“sacrificers”) might pay a steep price (Shea & Guzzo, 1987;  Cross & Prusak, 2002; De Dreu, 2007; Ladley, Wilkinson & Young 2015; Buford & Walter, 2017).

Team-based incentives and rewards may prove more difficult to administer (particularly in larger teams) because individuals come to their teams with different goals and contribute varying levels of effort and/or value (Pearsall, Christian & Ellis, 2010). Team rewards may even introduce issues of “free-riding,” where individuals let their teammates do most of the work while sharing equally in the reward (DeMatteo et al., 1998; Bornstein, Gneezy & Nagel R., 1999; Ladley, Wilkinson & Young 2015; Majerczyk, Tian, & Sheremeta, 2019). Moreover, a significant body of research questions the very efficacy of team-based incentives. For example, in a 2010 meta-review published in the Journal of Business Research, the authors conclude: “Despite hundreds of studies examining team rewards, the conditions under which team rewards will be effective are unclear” (Aimea, Meyer, & Humphrey, 2010). These factors may combine to make leaders reluctant to consider team-based incentives and may also discourage their advisors (reward program designers and consultants) from recommending them.

Researchers have found that in small, highly-interdependent teams, hybrid rewards – which recognize team achievements and the behaviors and productivity of individual team members – can drive the best results of all (Johnson et al., 2006; Siemsen, Balasubramanian, & Roth, 2007; Pearsall, Christian & Ellis, 2010). Other research, however, finds that team-based rewards alone prove most effective in the same circumstances (Ladley, Wilkinson & Young 2015).

The research cited is consistent in finding that team-based and hybrid rewards are most effective where the work in small teams is “highly-interdependent.”  Opinions differ on what constitutes a “small” team. In most cases, researchers mean teams of ten or fewer, but this will vary depending on the complexity of the work and the degree to which team members have worked together in the past. Highly-interdependent teams are those whose members must work closely with other team members to accomplish goals – a volleyball team, for example – versus the sort of team where members perform independently toward a larger team goal – say, a gymnastics team.

The long and growing body of research cited above suggests that as a small team becomes more interdependent, better communications and greater cohesion will result in better performance. Researchers also find that individual and organizational performance improves with team performance (Lim & Chen 2014; Ladley, Wilkinson & Young, 2015). However, when a team does not perform highly-interdependent work, greater communications and cohesion might actually harm performance; largely because it is time-consuming and unnecessary (Barrick, Bradley & Colbert, 2007).

Work in teams has grown increasingly complex and more often features broad and deep interdependencies (DeMatteo et al., 1998;  Ladley et al, 2015;  Ali, Fuenzalida, Gomez & Williams, 2021). An assembly line, for example, represents a “serial dependency,” in that even though the team co-creates a finished product, team members work individually, passing their completed work on to the next person. In a restaurant, on the other hand, there is “pooled task interdependency” (Ladley et al, 2015). The chef, cooks, wait staff, bartenders, hosts, and bussers must communicate closely and work cohesively to ensure smooth operations, especially during the busiest hours. In these cases, team-based or hybrid rewards are more appropriate. Again, where a team does not perform highly-interdependent work, leaders should probably not use incentives (or other means) to encourage unnecessary communications and cohesion. Here, individual incentives are likely more effective (Johnson et al., 2006; Siemsen, Balasubramanian, & Roth, 2007; Pearsall, Christian & Ellis, 2010; Ladley et al, 2015). 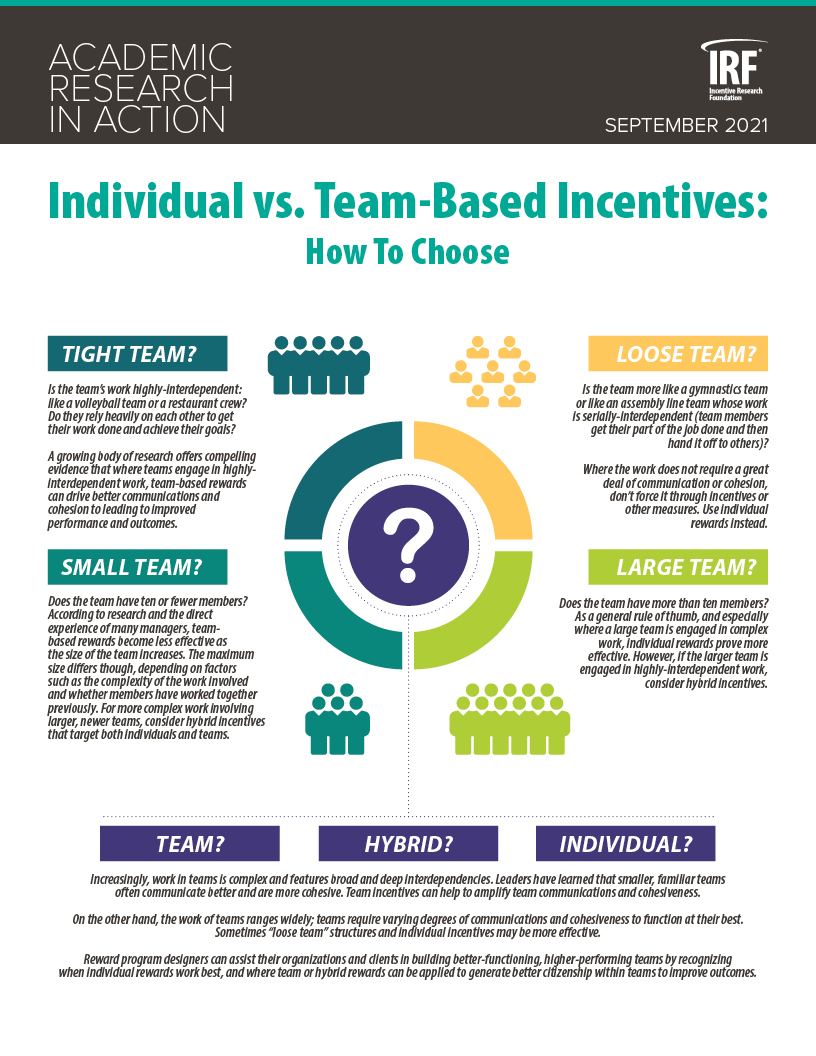