Academic Research in Action: The Psychology of Points Reward Programs

Through much of 2021, the IRF and researchers from the University of Waterloo and the University of Central Florida collected data and conducted interviews in an exploration of the psychology behind employee points-based reward programs. These programs have proliferated inside organizations almost in tandem with their popularity in the consumer space.

We analyzed survey results from more than 1,000 respondents in North America and Europe, finding that respondents who work for organizations that use a points reward program (versus no points program) report:

These findings at first struck us as surprising. After all, consumer points programs have become so ubiquitous that many people have a hard time tracking (even remembering) all the programs they earn points through. One of our experts told us that the “average consumer has signed up for more than seventeen different loyalty programs but is maybe engaged in five.” The authors of a 2006 academic study into consumer points programs concluded, “Even as loyalty programs are launched left and right, many are being scuttled, and not with a sense of mission accomplished.”

“In behavioral science, there is the notion of medium maximization. People focus on the medium and will therefore, focus on points to collect and grow them. You can leverage that to keep them engaged – it makes it sticky. – Expert Interviewee

Nevertheless, whether aimed at consumers or employees, points reward programs show no sign of abating. The obvious question then, is why; or for our purposes, why do employee points programs motivate, engage, and cause workers to identify more with their firms? The first clues come from our primary research (survey and interviews). We found that:

These findings suggest that there is a psychological aspect to points reward programs, one that goes beyond the basic transactional elements of receiving and redeeming points for tangible rewards, and even past the well-known psychological benefits of receiving recognition and appreciation. Among the most compelling evidence we uncovered in our examination of the literature surrounding these questions comes from behavioral scientist Robert Sapolsky, who discusses the Anticipation of Reward in his 2018 book, Behave. Though the pleasure-inducing neurochemical dopamine wears off quickly as one habituates to (gets used to) a reward, it turns out that the anticipation of a reward lasts longer. Sapolsky explains, “Once reward contingencies are learned, dopamine is less about reward than about its anticipation… the pleasure is in the anticipation of reward, and the reward itself is nearly an afterthought.”

Figure 1: The Anticipation of Reward

This science supports our experts’ observations that it doesn’t appear to matter a great deal when or for what a person redeems their points. The journey matters as much or more than the destination – the anticipation delivers the greater amount of dopamine and pleasure than the reward.

Sapolsky’s findings may find support from an earlier study by Joseph Nunes and Xavier Drèze. In it they describe how a person awarded two stamps toward a reward for which they need to accumulate ten stamps, strives significantly harder and longer to acquire the necessary stamps to achieve the reward than another who starts at zero. They call this the Endowed Progress Effect. Though points reward programs don’t typically ‘endow’ individuals with free points up front, simply getting an initial points award may put employees in the same mindset. The endowed progress effect and the psychology of anticipation present strong arguments for making points reward programs as broad-based as possible, and for not expiring unused points or pushing too hard on individuals to use them. It also suggests that that firms should continue to find a variety of reasons to reward with points and use features such as leaderboards and recognition in combination with points.

“Sending recognition helps build relationships. The beauty of a points program platform is it can remind people to do things. You can set it up so that notifications and reminders go out to managers and others to help them remember to recognize birthdays and other important milestones. Managers may have twenty reports these days, and peer-to-peer points programs help them see recognition ‘coming in’ and keep track of it. They can reach out and double the impact by asking a report about the peer recognition they received, congratulating them, and increasing the impact. This builds the relationship.” – Expert Interviewee

Another important advantage of points programs is their potential reach. Points programs should include an element of peer-to-peer recognition. When the giving of appreciation is restricted only to leaders and managers, impact is limited. Firms can scale recognition and embed the benefits into the culture by extending points recognition programs to employees themselves. From a psychology perspective, this is vital. Scientists have long understood the incredible influence that people have on one another. Some call it Behavioral Contagion, a force so powerful that it affects people’s weight, alcohol consumption, likelihood to smoke, get vaccinated, even have children. In points programs it proves a powerful positive force for building a broad culture of recognition and appreciation.

In his latest work, Professor Rob Cross shares the following story: “After toiling away as an HR professional for twenty years, Stella now manages a cutting-edge ‘engagement tool’ that encourages people to recognize coworkers who do things well or exemplify company values. It allows users to suggest rewards for their colleagues. Stella loves this product. It’s what drew her to the company. If your company implements it, your colleagues become your advisors and your cheering section. It makes the old HR applications Stella once used as an HR manager seem prehistoric.”

Beyond ensuring that your points reward programs include peer-to-peer recognition, we recommend the following based on our research:

Read the IRF’s study, The Psychology of Points. 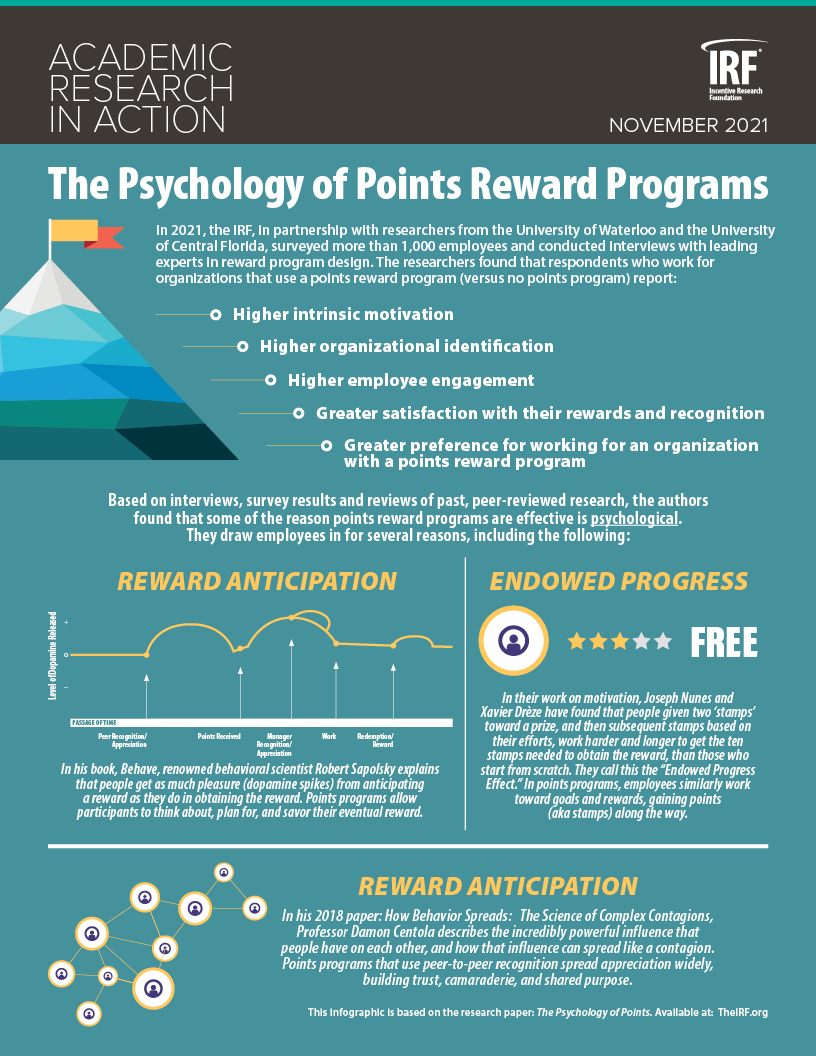