Mixed News in IRF Outlook Study, but Many Reasons for Optimism in 2022

While there are quite a few encouraging signs for the incentives industry in 2022, there is a lingering pessimism among some that may be the result of unfulfilled expectations in 2021. According to several key metrics, the outlook is optimistic. In both North America and Europe, 78% of respondents reported that they expect their company to have strong financial performance in 2022. This optimism is tempered by the lingering effects of a challenging 2021, including a very large increase in cancellations of merchandise and gift card programs.

For the first time ever, this IRF signature study was expanded to include European participants. The IRF conducted an online survey of incentives industry professionals in late September-early October 2021. The sample included 481 participants, with 275 coming from North America and 206 originating from Europe. Of those, 175 North American respondents and 200 European respondents were recruited from an online panel provider. The remaining sample was collected from various incentive networks on a volunteer basis. The study included respondents from three different groups:

The 2021 sample group had a much higher percentage of corporate clients (60%) than the previous wave (39%). There was also much less representation of suppliers (9%) compared to 24% in the previous wave. The number of suppliers in the study was too small to break this group out separately, although their responses were tallied within the totals.

There was an even spread in the countries of origin for the European respondents.

For both North American and European respondents, 78% agree or strongly agree that they expect their company to have a strong financial performance next year. This represents a significant rebound from the previous year where only 64% of North Americans foresaw a strong financial performance from their companies in 2021. Two-thirds (63%) of North Americans believe the U.S. economic outlook is strong for 2022, compared to only 50% who felt similarly going into 2021.

This economic optimism exists even though there was a very large increase in merchandise and gift card program cancellations in 2021. The percentage of cancellations rose from 29% in 2020 to 44% in 2021. The percentage cancelling programs in Europe this past year was even higher than North America, with 66% of Europeans reporting cancelled programs. There is some speculation that respondents may have also considered cancelled travel programs, even though the question specifically referenced cancelled gift card and merchandise programs.

A confusing statistic in this study is that even though North Americans expressed a high degree of positivity regarding both their own company’s financial outlook as well as the economy as a whole, far less optimism was expressed in response to a separate question about how the economy will impact non-cash reward planning and execution. In fact, the net score of positive vs. negative responses was -4% for third party providers. While corporate clients were higher with a net positive score of +25%, it was difficult to understand the negativity, unless the respondents had in mind the instability regarding COVID-19. Optimism was stronger last year, presuming that people may have expected to turn the page on the pandemic, only to find it still reared its head to impact incentive programs in 2021. Optimism was much stronger in Europe, with a +40% positive net score, which is like the highest peaks previously observed in North America.

One finding that is important due to its non-movement is optimism toward the regulatory environment which did not change for North Americans since last year (22% in 2020; 20% in 2021) despite the transition in the political situation to a party usually more favorable toward stricter regulations. In this case, however, any political transitions have been inconsequential on the regulatory environment.

There were other interesting data points around considerations for non-cash program design. The net importance of public perceptions jumped for North America (44% to 73%) and was even higher for Europe (81%). The only time public perceptions influenced program design to this extent was in 2008, during the Great Recession. However, instead of fearing the court of public opinion, the reason public perceptions may be so important is that employers are trying desperately to attract talent, and having strong reward and recognition programs certainly help in this regard. There was also a sharp increase in the percentage of North Americans taking into consideration competitor programs (39% to 67%). This marks the highest percentage considering competitor programs in their own program design since the study began in 2008.

Two final data points should fuel quite a bit of industry optimism. First, respondents stated their intention to dramatically increase budgets across the board next year. Second, they expressed the intention to increase the use of third-party partners in both North America and Europe. 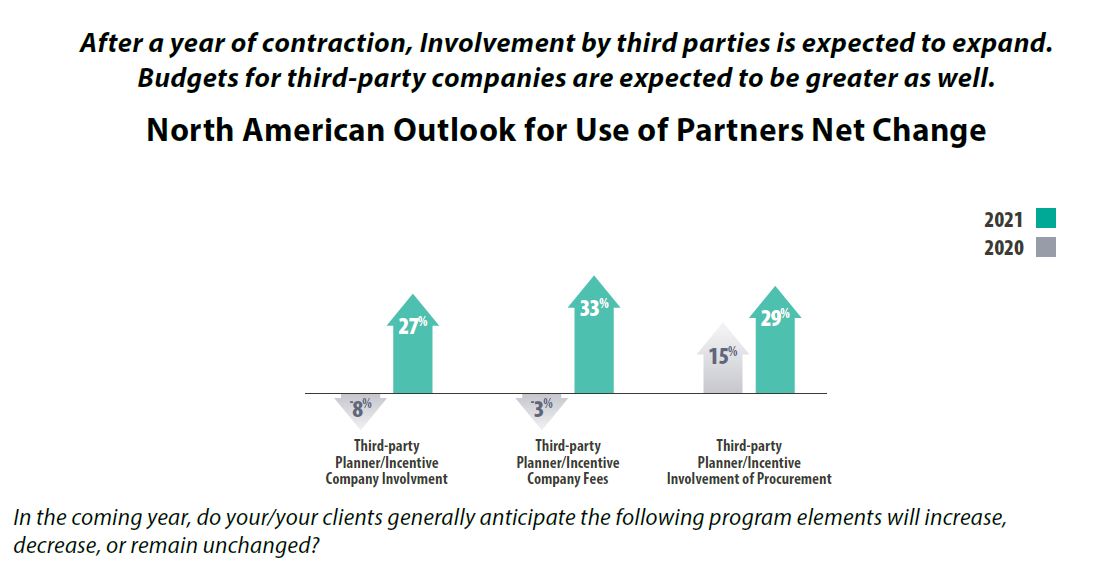 Logoed brand name merchandise, along with clothing and electronics, represent the merchandise categories with the highest prevalence in North America in the 2021 study. Some of the shifts from the previous wave are a result of a sample mix toward a much greater proportion of clients. The merchandise mentioned is very consistent with the goods mentioned in 2020 by clients. 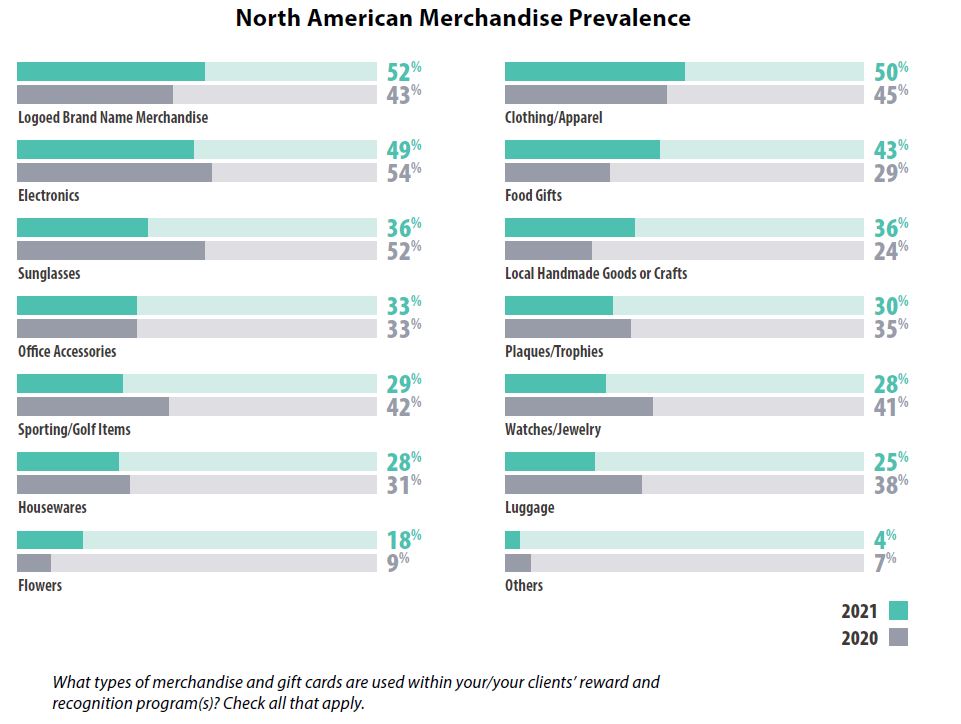 The average value of a merchandise reward is $152. This is easily within the range for the last three waves of the study that have provided the exact same average amount of $160. The percentage that spent $100 or less on merchandise was the same as a year ago, 47%.

The use of open-loop and restricted cards declined in 2020. While 2021 open-loop card use was still down quite a bit from 2019 levels, the use of restricted cards rebounded to pre-pandemic use levels. Europeans are much more likely to use restricted-use cards and vouchers compared to North Americans.

Incentives professionals in Europe and North America frequently use different types of gift cards with similar prevalence to one another. However, there are some exceptions. North Americans are far more likely to give ‘big box’ retailer cards, as well as coffee cards. Europeans, however, are much more likely to give gift cards for accessories and jewelry, as well as gift cards for beauty products, travel, and grocery. 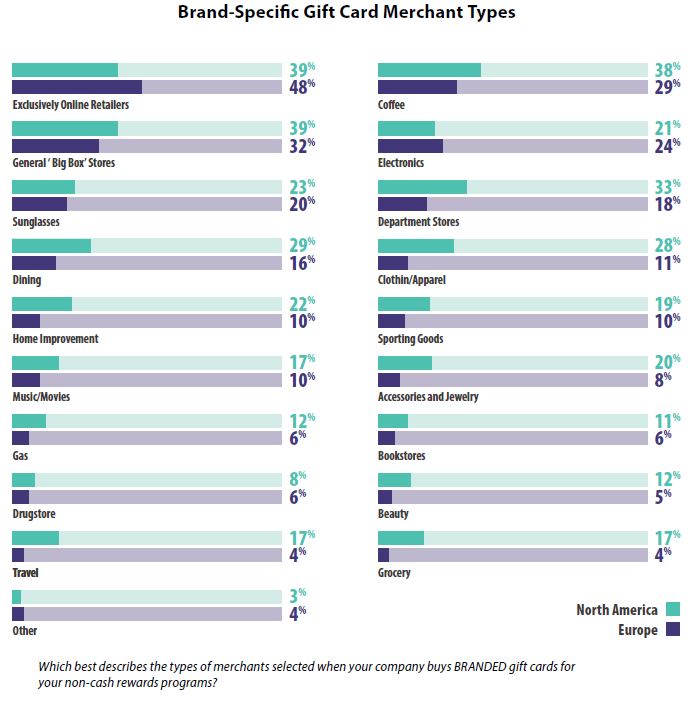 The average per-person amount spent on gift cards is $127, which is nearly identical to the previous two-year averages ($120, $129). The most common denominations for gift card rewards are $100, $50, and $25. Fifty-eight percent (58%) use gift cards of $100 or less, down from 79% last year, suggesting people are giving gift cards for higher amounts.

One last interesting data point concerning gift cards is the persistent practice of corporate clients directly purchasing their gift cards through retail outlets, despite the fact there are so many easier ways to source gift cards. Corporate respondents were asked if people in their organizations are visiting local retailers to purchase gift cards for use as employee reward and recognition. The percentage for North Americans has been remarkably consistent. In 2021, 65% indicated this is occurring in their organizations. In 2020, the percentage was 61%, while in the previous two years, the reported percentage was 69%, all within sampling error. Even more surprising was that 82% of Europeans sourced their own gift cards.

For the most part, North American event gifting has remained consistent with 2019 levels, prior to the pandemic. The exceptions are incentive trips, advisory boards, and product launches where event gifting is significantly lower than 2019.

The prevalence of items custom-made or fitted on-site decreased dramatically from 72% to 49%, offsetting an increase from 2018 to 2019 (59% to 72%.) A new category, gift cards, received 37% mention, nearly as high as local food and beverage (39%). Europeans are most likely to give locally relevant goods and crafts as gifts, and less likely to give nationally recognized brand merchandise and gift cards, compared to North Americans. Sponsorships of event gifts seems to be declining around merchandise donations, going down from 25% in 2019 to 14% in 2021. Europeans do much better at getting sponsorship fees and discounts to pay for event gifts.

In North America, 77% of respondents indicated they allow brand representatives to engage with attendees. It is a near-universal practice in Europe, with 90% allowing this interaction.

Given that organizations are trying to re-engage attendees in meeting activity, it is surprising that spending on event gifts has declined to such an extent. The good news is that event gift budgets are projected to increase significantly in 2022, particularly in Europe.

While 2021 did not represent the complete return to normalcy for which everyone hoped, there were signs of progress that were then often hindered by speedbumps. The uncertainty around the travel industry made program planning and design a guessing game in some respects. Signs for 2022 are encouraging, as we see that spend has started to shift away from gift cards back to travel. Budgets for 2022 appear to be increasing, as is the intent to use incentive partners. Spending for event gifting is expected to increase. The future remains unpredictable, but the desire to invest in incentives has never waned. The industry and its customers are simply waiting for things to settle before they completely embrace an optimistic perspective. 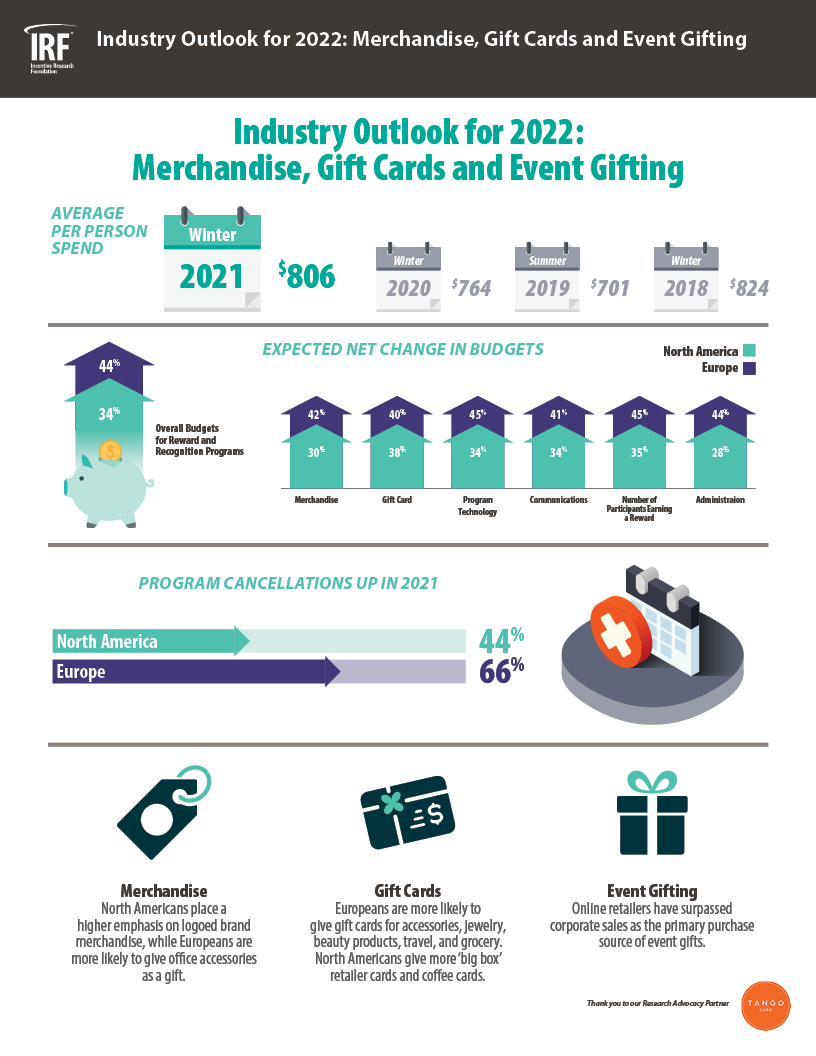 The IRF thanks the following organizations for supporting this report by distributing the survey: 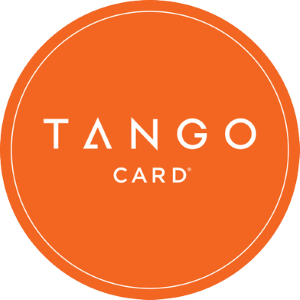 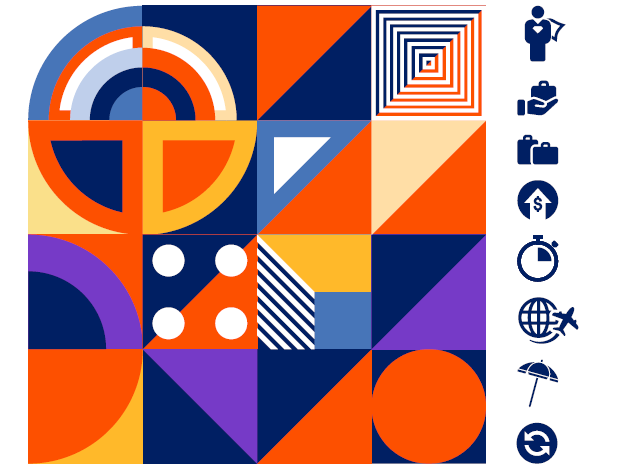 As we enter 2023, COVID concerns have subsided, while workforce issues take on increased urgency. Given one of the most challenging labor markets in history, incentives are an increasingly critical business strategy to help organizations attract, retain, and build culture. 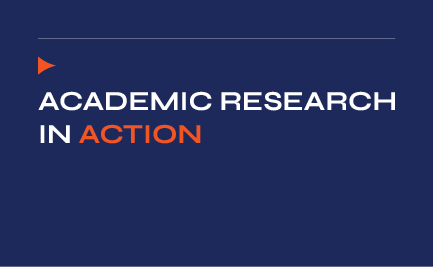 The IRF partnered with researchers at the University of South Carolina and Hong Kong Polytechnic University to conduct a series of experiments studying the relationship between employee satisfaction and engagement and turnover in the hospitality industry.