Research / Metrics of Success for Incentive and Reward Programs

Metrics of Success for Incentive and Reward Programs

White Paper: Metrics of Success for Incentive and Reward Programs

Infographic: Metrics of Success for Incentive and Reward Programs

Reference Deck: Metrics of Success for Incentive and Reward Programs

Webinar Deck: Metrics of Success for Incentive and Reward Programs

In times of economic downturn, metrics showing ‘hard’ return on investment become even more important for the industry

So much has changed in the world since the IRF fielded its “metrics study” in 2019. In the face of a global pandemic, companies are challenged to dramatically cut costs, and difficult decisions are being made about what is essential versus expendable. Those who are highly invested in the incentives industry believe strongly that the programs they support drive positive economic value for companies rather than being ‘nice to have’ during favorable economic times.

The data have historically showed that incentives programs were primarily believed to drive ‘soft’ outcomes like engagement, morale, loyalty, etc., or perhaps were simply accepted as an important component of company culture. The data presented in this year’s study show this trend was beginning to change, even compared to when the IRF conducted the previous metrics study a year earlier. Perhaps there was an anticipation of a downturn, or perhaps people were beginning to feel their corporate incentive programs simply needed to be reevaluated or refreshed. Whatever the explanation, the industry was starting to place more focus on measuring program success rather than just accepting the value of these programs on faith.

The study was conducted in the summer months of 2019. The sample included 204 respondents, representing a cross-section of US businesses with $1M or more in revenue. These individuals, covering a wide range of business sectors were decision-makers for their companies’ non-cash rewards programs.

When asked, 78% considered their programs to be ‘successful.’ This was especially true of large businesses making $1B or more in revenues where the percentage was even higher (85%). While ‘softer’ metrics like participant satisfaction, participation, and employee morale were often used to define ‘success,’ program managers were asked to provide more evidence to support these programs than in the past, particularly among large firms.

Data from both this study and the IRF’s Industry Outlook for 2020 suggest that participant satisfaction, rather than simple participation, has begun to take on greater importance. The studies also suggest that programs are getting more scrutiny than in the past, primarily to ensure they were still being effective.

The percentage of large companies ($1B or more) who said hard metrics are unnecessary to justify their investment in sales incentive programs dropped from 57% in 2018 to 39% in 2019, suggesting these larger firms were no longer as willing to accept program value on pure faith. Similarly, the percentage of $1B+ companies who say they monitored specific results increased from 26% in 2018 to 39% in 2019. Similar results were shown for executive attitudes toward channel and employee non-cash incentive programs. While these figures still suggest many more programs could benefit from additional measurement and analysis, the trend was that objective validation was increasing.

Despite the fact that the largest companies claimed to be seeking higher accountability for their incentive programs, their review processes were not always consistent with this claim. For example, 21% of those working with large companies said their program review process was ‘infrequent, if an issue or question comes up.’ Fewer than half of large companies (44%) said they have ‘formal scheduled program reviews.’

Getting Executives Engaged Is Still a Challenge

Over 40% of companies struggled to get their executive teams to pay attention to the data. This was true across various sizes of companies. This was particularly true for large companies where nearly half (48%) had this challenge. While the majority (82%) said detailed analysis would guide executive investment decisions if it were available, the data suggest the caveat is whether they could get their executives to engage with the data.

Analysis Has Improved, But Most Would Like to Improve the Data They Are Able to Collect and Capture

Two-thirds of large companies (64%) felt they had strong data to guide design considerations, with medium and smaller companies feeling somewhat less positive. Only 9% said they could not show any type of measurable ROI story. However, much of this ROI story focused on ‘soft’ metrics, particularly for smaller companies. Nonetheless, companies saw many areas of opportunity for improvement in their program analysis, particularly with regard to the data they collected and captured. All totaled, 76% of respondents reported they would like to improve in this area. The data strongly made the case that while companies were doing better with metrics and analysis, they still saw considerable room for improvement.

Use of External Partners is Low, Even Though Their Value is Recognized

The data showed companies largely relied on internal staff to conduct their analysis. Overall, about one-third (36%) worked with outside agencies to support their incentive and rewards programs, although the percentage was higher among large companies (46%). Similarly, one-third (31%) worked with external consultants to evaluate their programs. In this case, there were no meaningful differences based on company size. Despite the relatively low incidence of use, a majority (81%) believed external partners could ‘definitely’ or ‘probably’ produce insight to improve program results, with almost no one believing using partners would not add any value. The fact that most believed working with external suppliers increased the likelihood of a successful program, yet only one-third making the decision to use external partners, was one of the more striking findings of the study.

Despite the positive economic times that occurred when the study was being administered, one-third (33%) of respondents had been asked to reduce budget, with nearly half (48%) of large companies being asked to make cuts.

Approximately one-in-four (27%) indicated that, in the event of an economic downturn, they would be asked to discontinue non-cash reward and recognition programs until business improved. The largest percentage (43%) said they would proportionately reduce program budgets to match wider company budget reductions. Only 15% said they would not be asked to reduce spend at all. It is likely that during this global pandemic, these numbers will be greatly tested.

The state of metrics in the pre-pandemic environment was a mixed bag. On one hand, there seemed to be an increasing demand for program metrics, particularly within larger companies. Nearly two-thirds (64%) of large companies felt they had ‘detailed’ analysis to guide program changes. At the same time, the program review process was largely inconsistent, and it was a challenge for many program managers to get their executives to pay attention to the data. Four-out-of-ten (41%) of respondents expressed that employee incentive programs were seen as an ‘investment in the organizational culture’ and did not ‘have a need to demonstrate results to justify the budget.’

Quite often, when measurement was used to determine program success, the analysis was conducted by internal analysts. While only about a third of companies called on external partners to support and measure the success of programs, the majority agreed that having such external support would have been helpful.

When the survey was fielded prior to the pandemic, most respondents indicated that if incentive program cuts were called for, they would be proportionate to budget cuts across other areas. We are now likely to see if this will actually be the case, particularly during these grueling economic times. As cost cuts and furloughs become necessary, it is natural to see remaining employees asked to take on more. Performance in these times can decline for a multitude of reasons. Incentive programs can be used to keep remaining employees motivated and feeling appreciated for their incremental efforts.

At some point, the world will emerge from the pandemic. The speed of complete economic recovery is anyone’s guess. However, the data suggest some best practice learnings once the world emerges from its at-home shelters.

The data show that some right steps were being taken prior to the pandemic, although it is also likely many companies were caught unprepared. Economic crises tend to surprise us although no one could have imagined the scope and impact of the COVID-19 pandemic. Perhaps there is little anyone could do to fully prepare, but it is a lesson learned to protect incentive programs with as many metrics as possible.

We have never lived in an era where employee motivation is so important. Many employees are cut off from their company culture and isolated from colleagues. Some employees are being asked to work in a public setting, and some are not motivated to show up for work. Your incentive program is an important tool to motivate your workforce and keep them engaged, particularly as the hard work of rebuilding business begins. Taking steps to position your program as a driver of performance and revenue with a strong combination of hard and soft metrics can help solidify your program’s place within your organization. 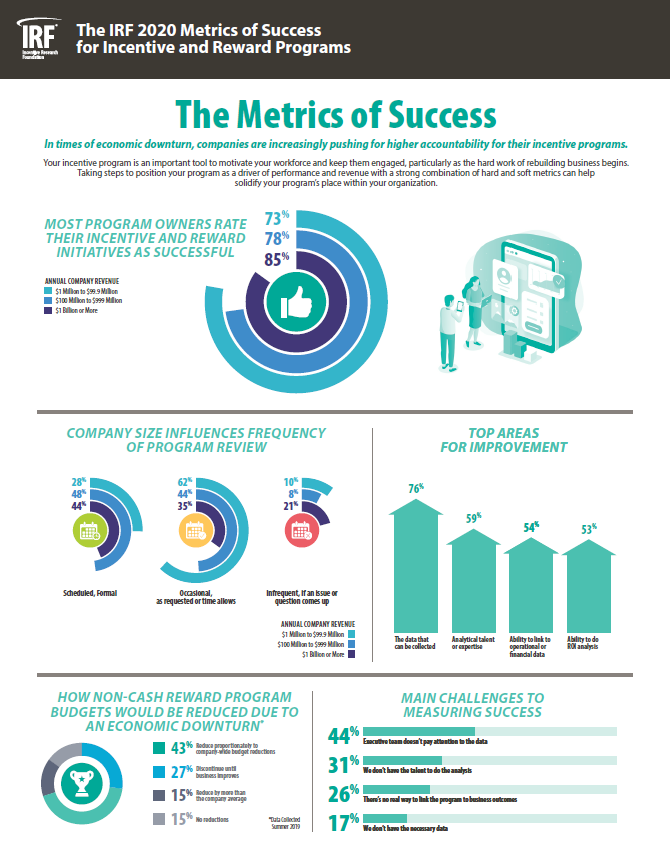