Simple ‘one size fits all’ approaches to reward and recognition may not achieve their full potential in motivating and engaging employees.

During these challenging times, employees in all industries need to feel valued, particularly those who put themselves at risk through public interactions. Many companies are forced to do more with less, putting an additional strain on human resources. While many executives and managers want to express appreciation for outstanding performance, they often lack insight as to which recognition strategies appeal the most to their workers.

A key consideration is that, sometimes, what people say they want most may not be linked to the intended outcomes of the incentive program. For example, cash bonuses were highly rated by employees as a preferred reward, but cash bonuses were not associated with high levels of engagement. Given this disconnect between preferences and performance, the goals of this study are:

The study sample was 1500 US-based respondents who were employed full-time (35 hours+ per week).  Respondents could not be self-employed, an independent contractor, or temporary worker.

The survey was approximately 15 minutes in length.

The respondents were divided across a diverse number of industries, with no single industry representing more than 14% of the total sample. The gender of the sample was almost an even split ( males 51%; females 49%) and evenly balanced between Millennials (30%), Gen X (30%), and Baby Boomers (36%), with a small number of Gen Z (18-22) and Silent Generation members (75+) making up the rest of the sample.

The Study: Recognition and Reward Preferences 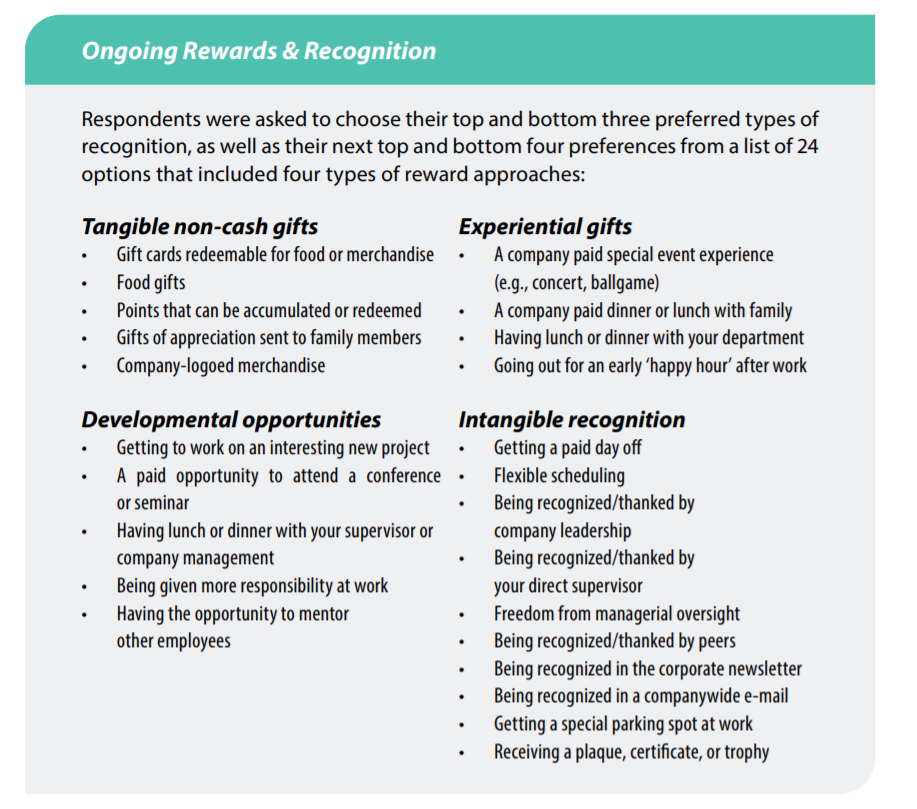 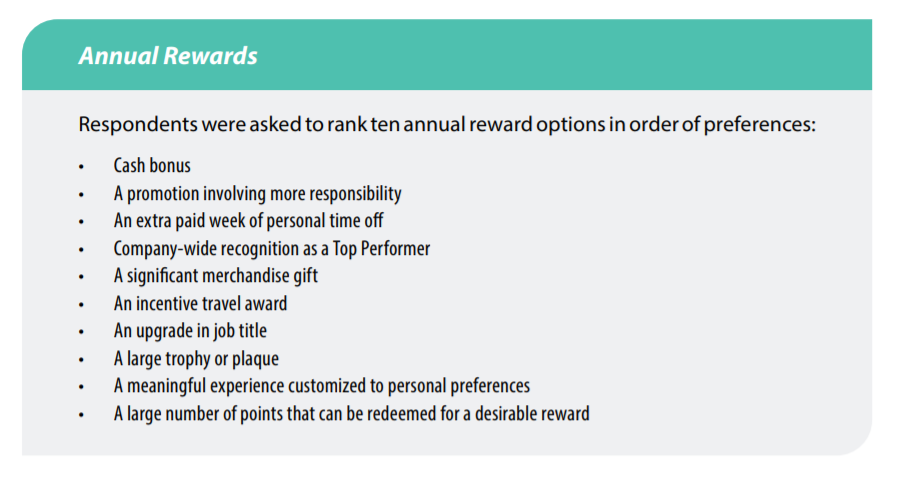 Preferred Rewards: The Gifts of Time and Experiences Take Precedence

Employees ranked getting a paid day off as the top preference.

The low rankings, however, do not necessarily suggest these forms of recognition have no value. Several of these approaches are associated with higher employee engagement outcomes, as will be described later in this paper.

Even among top and bottom ranked preferences, there are some who reverse the order of preference.

There is no recognition strategy that is universally embraced or dismissed.

There are some gender differences in reward preferences.

While cash bonuses received a top three rank from 88% of respondents, other annual rewards were associated with higher levels of engagement and motivation, as will be explained later in this paper. Often cash bonuses are treated similarly to compensation and used to pay expenses rather than having the same trophy value or emotional resonance as some of the other reward options.

The only other annual rewards that had over 30% ranking them in their top three were:

Many highly preferred recognition types were awarded to less than 10% of respondents.

However, two forms of recognition that ranked high in preference, flexible scheduling and paid time off were the two most common ways people were recognized.

Satisfaction with Recognition Has a Clear Impact on Engagement Outcomes 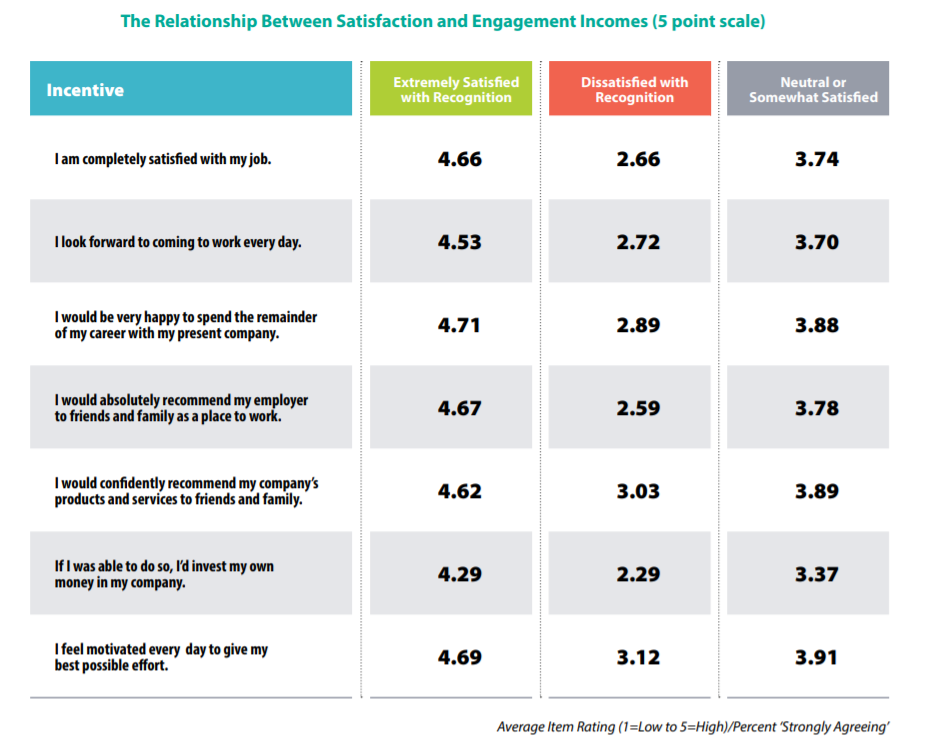 Note that getting a special parking spot at work and getting recognized in the corporate newsletter were among the lowest rated preferences. The data show that certain types of recognition are associated with favorable job satisfaction, as well as other positive engagement scores. This suggests that, while some things may not be a top of mind preference, they are still greatly appreciated by the recipients.

Another theme that emerges from these items is the focus on family (e.g., having a gift or token of appreciation sent to family members, having lunch or dinner with your family paid for by the company) which re-emphasizes the high importance many people place on their families during this time of national challenge. It underscores the importance of recognizing ‘family’ as a strong cultural value of companies.

With regard to annual awards, cash bonuses were almost universally a top pick of how employees wanted to be rewarded. Yet, receiving a cash bonus was ranked sixth when rewards were correlated to job satisfaction and for motivation to do best work. 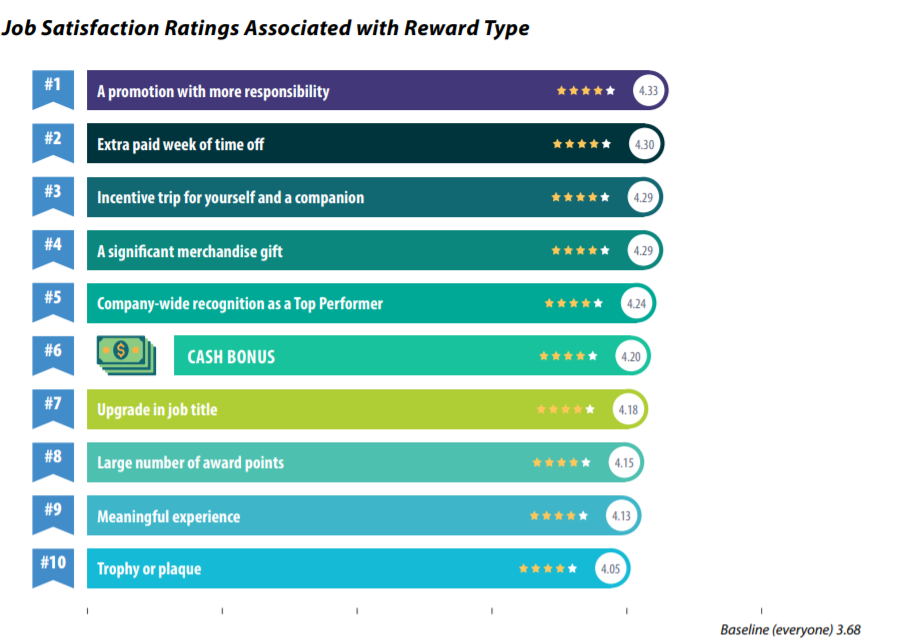 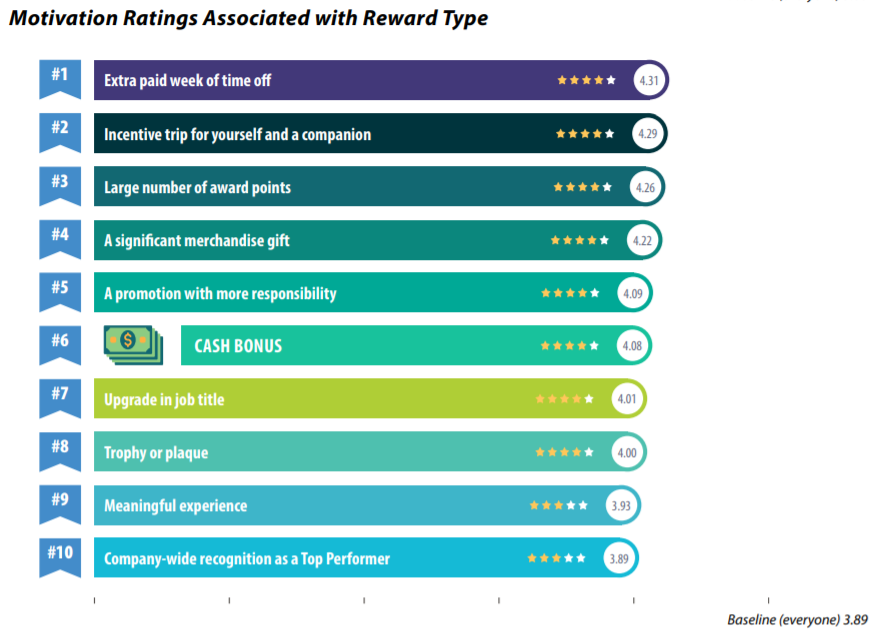 Shifts in Preferences in Tangible Non-Cash Rewards Since the Pandemic

Given that the world has changed dramatically since the pandemic, we would expect that preferences in how people like to be recognized and rewarded would change as well.

However, the study revealed that only 16% indicated their reward and recognition preferences had changed. Among this 16%:

Since there was wide variation in interest and willingness to travel, we looked at net interest in rewards. Some respondents indicated they did not want to travel, while others showed an increase in incentive travel experiences, particularly those that were within a driving distance and involved less interaction with people. 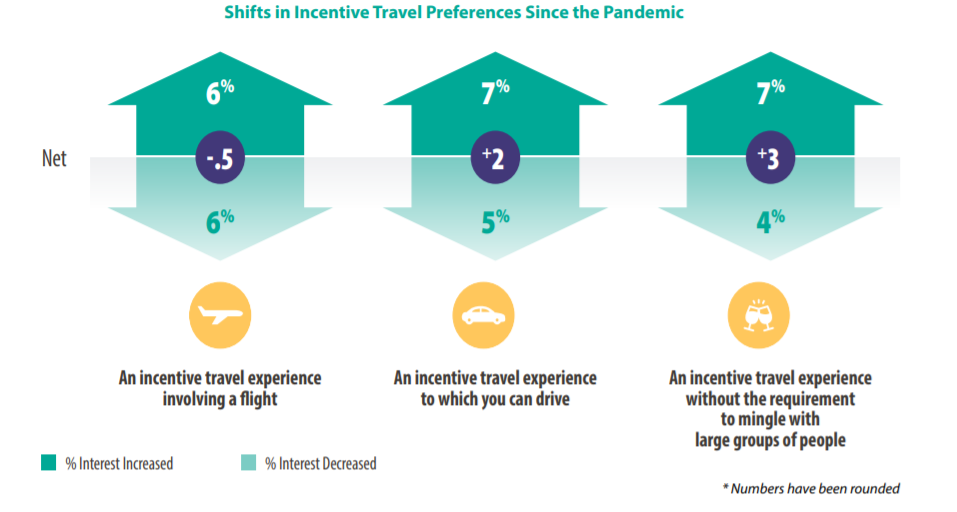 Effects of the Pandemic

Motivating Behavior and Making an Impact