In Fall 2016, the Incentive Research Foundation commissioned Flying Horse Communications and its Chief Scientist, neuroscience expert Dr. Steven Genco, to conduct a first-of-a-kind experiment in the field of rewards and recognition. The experiment used biometric techniques borrowed from the science of neuromarketing. It was designed to gain additional insight into reward-earners’ preference in receiving rewards and to test two hypotheses about rewards themselves.

The first paper in this series, Conscious and Unconscious Reward Preference & Choice: A Biometric Experiment, addressed the hypotheses. In this paper, we explore the question of reward-earner preference – at both the conscious and unconscious levels – in the presentation of rewards and recognition.

A search for published academic research on the topic of how people prefer to receive recognition and rewards yields few results. However, Gallup and others have conducted numerous surveys over the past decade that demonstrate people are as unique in how they prefer to be recognized as they are in the types of rewards they prefer (Rath, 2004).

Clearly, recognition matters a great deal, but its impact can vary widely depending on how it is delivered (Jeffrey, 2009; Shaffer, 2009; Dzuranin, Randolph, & Stuart, 2013; (Bartlomiejczuk, 2015; Kagel & Roth, 2016). In the first paper in this series, we explored reward type (cash vs. non-cash) to gain insight into unconscious preference and explicit choice. Our findings suggest both an unconscious and conscious preference for non-cash rewards, which supports a growing body of research that suggests non-cash rewards are more effective in driving performance gains, retention and engagement (Schweyer, 2017).

Our findings in this study (as reported in the first paper) confirm the importance of reward choice and individualization. It offers yet another warning against taking a one-size-fits-all approach to rewards and recognition. The experiments specific to this second paper in the series demonstrate that the same lesson applies to how rewards are presented. As other studies and surveys have found, some people prefer a great deal of pomp and ceremony when they are recognized, while others dislike the stage and would prefer a reserved and intimate presentation in front of their closest colleagues. Still, others prefer no show at all, just a verbal or written note of appreciation along with whatever cash or tangible non-cash reward that accompanies it.

For the experiment, 42 participants of varying age, gender and profession were recruited. In the reward presentation component of the experiment, each participant wore a headset and listened to a series of four realistic audio scenarios in which they received a reward during four different types of presentation:

While subjects listened to the presentation scenarios, they were biometrically assessed using two biometric techniques.

Our results are captured in Table One below. 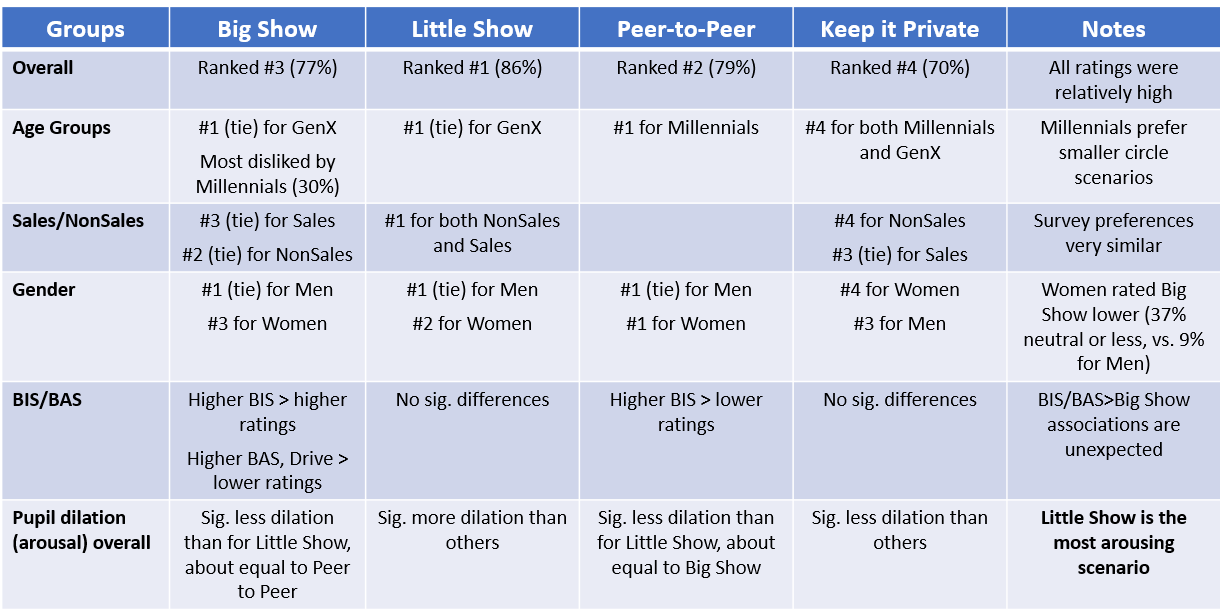 Though each of the presentation scenarios rated relatively well, our subjects’ unconscious reactions suggest a greater preference for a “Little Show” than for other forms of presentation. Importantly, when asked to rate the options (a conscious choice) “Little Show” is preferred by an even greater margin (86%).

The “Peer-to-Peer” and “Big Show” presentations also rated well and closely with respect to each other. The “Private” presentation rated consistently last in its ability to “arouse” the interests of our subjects as measured by pupil dilation, and in explicit ratings. This supports the large body of research that suggests at least some form of public recognition is important to all reward earners, and it adds new evidence that smaller (and perhaps more meaningful) presentations may be more effective than big, company-wide events for most people.

Our experiment was relatively small with only 42 participants. Findings by demographic group in this experiment should be considered with that in mind. Table one results above show that men were evenly split in their attraction to the “Big Show,” “Little Show” and “Peer-to-Peer” presentation, while women were clearly attracted more to “Peer-to-Peer” both in their explicit ratings and as assessed by pupil dilation. More interesting perhaps, sales people were less attracted to the “Big Show” than non-sales people.

Table Two below summarizes our findings by age group, role and gender. By age group, Millennials appear significantly more drawn to “Peer-to-Peer” presentations than other options. This is an interesting and potentially encouraging finding when juxtaposed with a large body of thought and research that suggests Millennials need more frequent recognition than other cohorts (Hershatter & Epstein, 2010). Our results also suggest that women are significantly less drawn to “private” reward presentations than men at the unconscious level.

The audio presentation scenarios portion of our experiment revealed several unconscious and marked differences in preference for reward presentation scenarios using the biometrics techniques of BIS/BAS and pupil dilation. This is it important because we tend to use visible indicators such as age, gender and job type, to assume what people might want. Our results reveal new, invisible indicators that are strikingly important.

In addition to those noted above, the “Big Show” option was less appealing to salespeople and women than to non-salespeople and men. It was the most disliked option by Millennials, but tied for first among Gen X. It is intriguing too, that those with high BIS where drawn to the “Big Show” presentation. These clues into the psyches of broad groups will help form additional hypotheses that can be tested in future research with larger numbers of participants.

Ultimately, our results, including those from the visual components of the study, demonstrate a highly-individualized range of preference. They suggest again, in keeping with much prior research, that rewards and reward presentation are more effective when individualized to each person’s preferences. Thus, the most compelling indicator from these audio-based biometric experiments may be that reward presentation preferences can not be closely predicted on the basis of gender, role, age or even the combination of all three.

This conclusion should be further explored in future research with larger sample sizes. We expect future biometric-based experiments involving a larger number of subjects will bolster our findings with respect to wide variation in reward type and reward presentation preference.

THANK YOU TO OUR RESEARCH ADVOCACY PARTNER 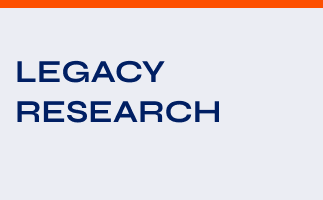 With the majority of all U.S. businesses now using non-cash awards and the majority of top-performing businesses (those with the highest revenue growth, customer satisfaction, and employee satisfaction) also saying their executives support their non-cash recognition and reward programs as a competitive advantage, there is now an imminent need to understand how to create effective…

In Fall 2016, the Incentive Research Foundation commissioned Flying Horse Communications along with the help of Steve Genco, author of Neuroscience for Dummies, to conduct a first-of-a-kind experiment in the field of rewards and recognition. The experiment used biometric techniques borrowed from the science of neuromarketing.