COVID-19 has wreaked havoc across the economy, significantly impacting financial services institutions. Banks have been affected with widespread bank closures, and opening hours have been shortened. Customers often wait in their cars for long periods to go through drive through windows when the walk-in branches are closed. Customers are also being encouraged to use online and mobile banking as customer service phone lines are inundated with a huge volume of calls. With banks being considered ‘essential’ businesses, employees have been asked to continue working through the pandemic. Even at reduced hours, this has undoubtedly strained employees at financial institutions.

A PWC study of finance leaders asked about their top concerns during this time1. The financial impact on operations, liquidity, and capital resources ranked first (71%), followed by potential global recession (64%). Ranked third was concerns about the ‘effects on our workforce/reduction in productivity’ (41%).

To qualify as “Top Performing,” a firm had to report strong overall performance across several areas, but the most important requirement for classification as a Top Performer was financial growth as all companies fitting this classification had to experience more than 5% growth in revenue within the past year. The additional criteria for qualifying included:

Using these criteria, 36% of participating financial services firms qualified as Top Performing companies, which was similar to the manufacturing sector (34%) but less than the technology sector (43%). The purpose of these survey questions and the ultimate classification as Top Performer or Comparator was 100% opaque to respondents – they did not know they were assigned to a performance group.

In both the technology and manufacturing sectors, the percentage of those structuring programs with the dual goal of both reaching all participants, while also recognizing truly exceptional achievers, jumped significantly for both Top Performers and Comparators. Within the financial services sector, this trend held true for Comparator companies as the percentage of ‘dual goal’ programs more than doubled, increasing from 11% to 24%. However, the reported ‘dual goal’ percentage among Top Performers only increased slightly from 12% to 17%. While Top Performers remained more likely than Comparators to structure programs with the goal of each participant receiving a recognition or reward, the gap between Top Performers and Comparators on program reach was much less distinguishable than in the other two sectors measured in the Top Performer Study.

Seven out of ten programs were designed and managed with strong collaboration across multiple departments. This was true for both Top Performers and Comparators. Comparators showed a sharp increase in collaboration (59% to 70%) catching up to Top Performers in this area. Four times as many Top Performing financial companies have programs designed with no, or limited input from other departments/divisions compared to others (21% to 5%.)

While both Top Performers and Comparators increased the number of automatic qualifiers for their sales incentive trip awards, the same was not true for channel incentive trip awards. In this case, only 73% of Top Performers gave automatic awards to channel partner qualifiers, a percentage much lower than the manufacturing and technology sectors. The 73% did not represent a significant change from the prior year. Unlike their counterparts in the other business verticals in the study, Comparator companies in the financial services sector showed a significant decline in the percentage that offered automatic awards (71% down to 56%). While automatic qualification trended upward for sales awards, the trend was toward more selection by committee among qualifiers for channel partner incentive trip awards.

Qualification Criteria is Moving in Both Directions

Use of Gift Cards and Group Incentive Trips Went Up Significantly

Participant flexibility remains a top priority for reward programs of both Top Performing financial firms and Comparators. Comparators place a higher priority on the tangible reward representing a ‘physical reminder for participants’ and ‘building brand loyalty,’ both areas that have increased quite a bit in priority for Comparators since last year’s study.

The 2020 Financial Services Top Performer Study portrayed a very positive outlook for the non-cash reward and incentive travel business. The data consistently showed high levels of engagement, support, and spend with non-cash incentives among Top Performing companies. Of special note, the study also showed that Comparator companies were, in many cases, increasing their investments in incentives, and in some areas, had gained near parity with Top Performers. Had it not been for the economic impact of the pandemic, we might have expected perhaps an even higher percentage of Comparators moving over to the Top Performer category during the next wave of the study as a result of their greater engagement with incentive programs.

One area that Top Performers might consider course correcting is the trend toward more complex qualification criteria for incentives. Comparators were trending toward making their criteria simpler while Top Performers trended toward greater qualification complexity.  During this period of economic slowdown, perhaps simpler would be better. Programs are more motivating if people know what they need to do to qualify for incentive opportunities and have both clarity and certainty about earning awards.

An area where Top Performers seem to really ‘get it’ is a greater recognition that ‘one size does not fit all’ when it comes to both non-cash incentives and incentive trips. While Comparators understand the importance of flexibility when it comes to merchandise and gift cards, they undervalue flexibility for designing incentive trips. Comparators place the greatest emphasis on having high perceived value for their incentive trips, while Top Performers recognize the value in personalization. It is not just about what something costs, or its equivalent cash value, but rather the personal appeal of the reward to the individual.

Incentive Research Foundation studies have shown that both participants and program owners are scrutinizing the value of incentive experiences more closely. Companies were getting a better understanding and holding their programs to higher standards. The fact that incentive flexibility represented such a high priority helps these programs to be more successful, thus motivating performance and promoting stronger business outcomes. Thus far, data collected by the IRF shows that incentive programs have not taken as much of budget hit as might have been expected during this time of economic upheaval. Keeping employees engaged and productive is particularly important at this time, particularly as large numbers remain working remotely. The progress shown by Top Performing financial services companies, as well as other companies striving to be Top Performers, relative to their effective use of incentives is encouraging and presumably, have shown enough of a return on investment to be seen as critical to business success in a financial services industry that is essential for keeping our economy moving forward as our opportunity to interact with one another may be limited for a while. 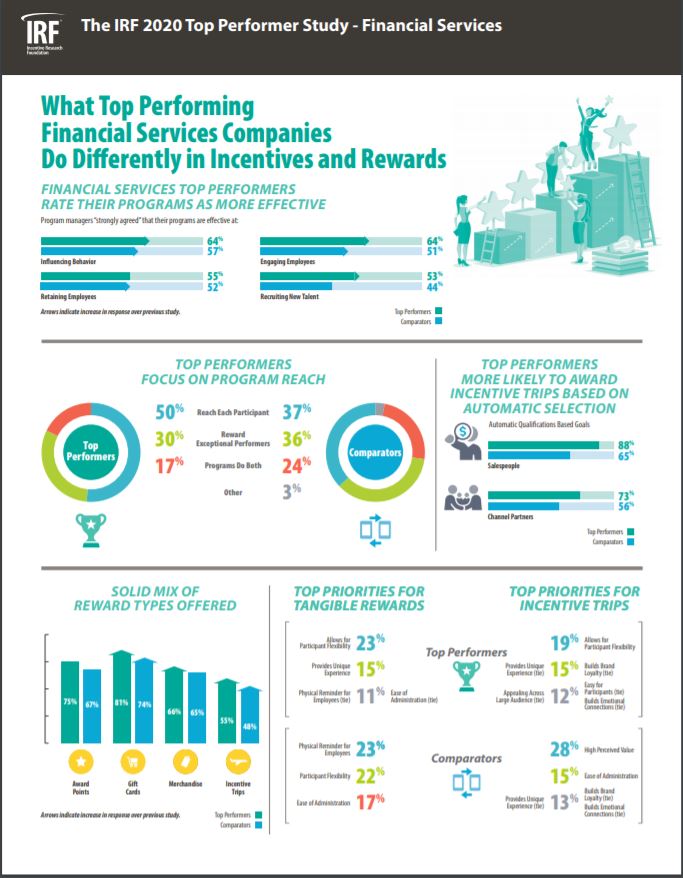 A study of strategies and best practices for incentive program design. Offers insights into how organizations can use incentives to address the immediate challenges presented by the pandemic and how incentives can accelerate recovery.