What Top Performing Manufacturing Companies Do Differently in Incentives and Rewards

A survey sponsored by the National Association of Manufacturers (NAM) revealed that about 80% of manufacturers anticipated that the pandemic would have a financial impact on their business. The manufacturing sector, which employs some 13 million workers in the US, has been hit hard during this outbreak. Manufacturing jobs generally cannot be carried out remotely, leading to significant disruptions in operations. When you add that the economic slowdown is decreasing demand for industrial products, the manufacturing sector is among the most challenged as a result of COVID-19. At some point, when it is time for the manufacturing sector to re-open, it will need effective strategies to achieve high levels of productivity among sales personnel, channel partners, and employees.

The IRF’s 2020 Top Performer Study focused on understanding how incentives and rewards differentiate the most successful companies from others. The study focused on several specific verticals, including manufacturing companies. Results for the manufacturing sector showed that the use of incentive programs had risen prior to the pandemic, particularly for the most successful top performing manufacturing companies. While overall, Top Performers were much more engaged in incentive programs than Comparator companies, the level of support for reward and recognition programs had risen significantly for both Top Performers and Comparators in significant ways, suggesting that more and more manufacturers recognized the important role of incentives as a competitive advantage.

To qualify as “Top Performing,” a firm had to report strong overall performance across several areas, but the most important requirement for classification as a Top Performer was financial growth; all companies fitting this classification had to experience more than 5% growth in revenue within the past year. The additional criteria for qualifying included:

Using these criteria, 34% of participating manufacturing firms qualified as Top Performing companies. The purpose of these survey questions and the ultimate classification as Top Performer or Comparator was 100% opaque to respondents – they did not know they were assigned to a performance group.

Program Reach Is Expanding for Both Top Performers and Comparator Companies

The percentage of top performing manufacturing companies who design programs with the dual goal of both reaching all participants, while also recognizing truly exceptional achievers, has nearly quadrupled within the past year, going from 8% to 30%. Similarly, Comparators with this dual goal also increased from 18% to 28%. Consistent with the previous year, Top Performers are still more likely to have broad ranging recognition programs (50%), and Comparators are more likely to structure programs that reward top achievers (40%). These findings are consistent across business sectors.

Program Collaboration is High Among Top Performers and Improving Within Comparators

More Incentive Trips Are Being Awarded Based on Objective Qualifications

Among top performing manufacturing companies, 91% automatically win sales incentive awards based on achievement of pre-determined goals, compared to only 66% of Comparators. Both Top Performers and Comparators increased the percentages who automatically win based on pre-defined criteria, moving away from selection by a committee. Currently, less than 10% of the Top Performers use a selection committee to finalize award recipients.

Unlike Other Sectors, Qualification Criteria is Getting Simpler for Manufacturing Top Performers

The use of gift cards increased significantly within the overall manufacturing sector, bringing parity between Top Performers and Comparators. There was no significant difference in the use of merchandise or group trips between the two groups either. The most important finding is that, other than incentive trips, the overall mix of rewards increased within the manufacturing sector.

A key differentiator between manufacturing Top Performers and their Comparators is the priority placed on flexibility of tangible rewards. Top Performers were nearly twice as likely to list this as their most important consideration (43%) when giving merchandise or gift cards versus Comparators (19%). Comparators were much more concerned that rewards had high perceived value as this was most likely to be named as their top priority (27%) compared to Top Performers (only 3%). The data suggest Top Performers understand that personal relevance of the reward is more important than the perceived cash value.  This is consistent with the findings of the overall study.

The 2020 Manufacturing Top Performer Study portrayed a very positive outlook for the non-cash reward and incentive travel business. The data consistently showed high levels of engagement, support, and spend with non-cash incentives among top performing manufacturing companies. While the use of non-cash incentives is likely not the sole cause of corporate success, there is a very clear relationship between the two. As companies achieve success in areas such as profitability, customer satisfaction, and employee engagement, they further this success through the implementation of successful reward strategies.

Channel engagement and motivation are especially important in the manufacturing/automotive sector. The data show that, on average, top performing manufacturing companies spent more on their channel partners relative to non-cash merchandise. This result is different than the previous year when, on average, Top Performers spent less than Comparators on non-cash merchandise for channel partners.

While the gaps between Top Performers and Comparators relative to the effective use of non-cash rewards was still quite large, Comparators showed improvement in many ways compared to the previous Top Performer study. A wider variety of different types of rewards is being used within these Comparator companies. There was improved executive commitment, greater collaboration, and greater program reach, just to name a few improvements among Comparators. The great concern, of course, is that the positive direction in which Comparators were moving could be reversed during the current economic downturn.

An area where Top Performers seem to really ‘get it’ is a greater recognition that ‘one size does not fit all’ when it comes to both non-cash incentives and incentive trips. While Comparators place the greatest emphasis on the ‘value of the reward,’ value is in the eye of the beholder. By focusing on ‘flexibility’ of the incentive experience, Top Performers recognize the value in personalization. It is not just about what something costs, or its equivalent cash value, but rather the personal significance of the reward to the individual.

Incentive Research Foundation studies have shown that both participants and program owners are scrutinizing the value of incentive experiences more closely. Top Performers seem to have a better understanding and hold their programs to high standards. The fact that incentive flexibility represents such a high priority for Top Performers causes these programs to be more successful, thus motivating performance and perpetuating these companies as Top Performers in their class. 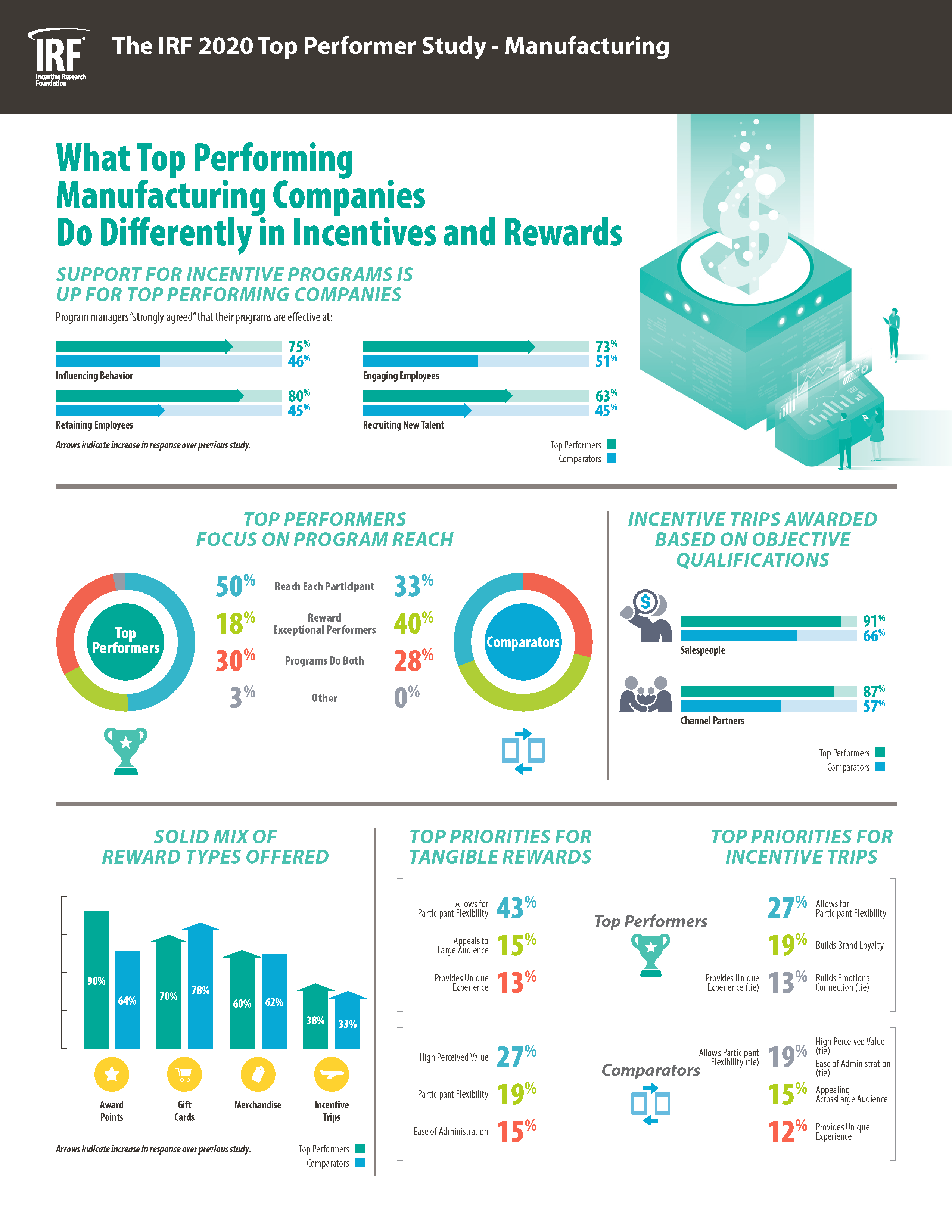