The impact of the recent pandemic was comparatively less on the technology sector compared to many other business verticals. In fact, the technology sector is helping us deal with disruptions from COVID-19, as people use videoconferencing and other online tools to work from home. Many have increased their use of streaming video, music, and games to provide themselves entertainment during periods of quarantine. Schools use online platforms to keep students’ educational pursuits on track. Furthermore, the development of disruptive technologies such as robotics and artificial intelligence continue to accelerate during this time. Nonetheless, the technology industry does not operate in a vacuum, and due to the economic downturn, technology budgets will take a hit, freezing spending and long-term projects, which potentially impacts long-term vendor stability.

The technology industry is one of the industries that is most conducive to working remotely. Based on a 2016 study by Gallup, 57% of employees working in computer/information systems spent some of their time working remotely. During this time of lockdowns and quarantines, it is likely the number of employees permanently assigned to work remotely has increased significantly. There is a challenge to motivating remote workers that the technology sector will find as an ongoing task.

The IRF 2020 Top Performer Study focused on understanding how incentives and rewards differentiate the most successful companies from others. The study focused on several specific verticals, including technology companies. Results for the technology sector showed that the use of incentive programs had risen prior to the pandemic, particularly for the most successful top performing technology companies. While overall, Top Performers were much more engaged in incentive programs than Comparator companies, the level of support for reward and recognition programs had risen significantly for both Top Performers and Comparators in significant ways, suggesting that more technology executives have recognized the important role of incentives as a competitive advantage.

To qualify as a “Top Performer,’ a firm had to report strong overall performance across several areas, but the most important requirement for classification as a Top Performer was financial growth as all companies fitting this classification had to experience more than 5% growth in revenue within the past year. The additional criteria for qualifying included:

Using these criteria, 43% of participating technology firms qualified as Top Performing companies, which represents the highest percentage among the three sectors in the full study (manufacturing 34%; financial services 36%). The purpose of these survey questions and the ultimate classification as Top Performer or Comparator was 100% opaque to respondents – they did not know they were assigned to a performance group.

Executive Sponsorship Increased for Both Top Performers and Comparators

Program Reach Is Expanding for Both Top Performers and Comparators

The percentage of top performing technology companies who designed programs with the dual goal of both reaching all participants, while also recognizing truly exceptional achievers, more than doubled from the previous year, going from 10% in 2019 to 22% in 2020. Comparators with this dual goal also went up significantly from 15% in 2019 to 24% in 2020. Like the previous year, Top Performers were almost twice as likely to structure programs with the goal of each participant receiving a recognition or reward during the program (58% Top Performers, 31% Comparators). Comparators were much more likely to structure programs that reward top achievers (43% Comparators, 17% Top Performers). These findings were consistent across business sectors.

Top down centralized management increased for Top Performers from 31% in 2019 to 52% in 2020 while Comparators remained stable in this area (26% in 2019; 30% in 2020). Centralized program management was more associated with Top Performers than Comparators, while Comparators were most likely to grant managers and executives discretion to purchase non-cash rewards based on corporate headquarters’ guidelines. This shift represented a significant change from a year earlier when 59% of Top Performing companies allowed their managers and executives discretion to purchase and issue non-cash rewards compared to 39% in 2020.

The Majority of Incentive Trips Were Awarded Based on Objective Qualifications

Qualification Criteria is Getting More Complex for Technology Top Performers

A key differentiator between technology Top Performers and their Comparators was the priority placed on flexibility of tangible rewards. Top Performers were more than twice as likely to list this as their most important consideration (35%) when giving merchandise or gift cards (Comparators, 14%). Comparators’ top priority was ease of administration (17%), although the differences in priorities between Top Performers and Comparators were otherwise relatively minimal. The data suggested Top Performers understood that ‘one size does not fit all’ and that flexibility was a critical component to a successful incentives program. This was consistent with the findings of the overall study.

Similarly, participant flexibility was a much greater priority for Top Performers in designing incentive travel programs. Participant flexibility was the top priority for 30% of Top Performers versus 7% of Comparators. It is noteworthy that Comparators named appealing across large audiences as one of their top priorities (21%). This was an important contrast as Top Performers recognized the difficulty in finding something universally appealing, instead focusing on trips that were more flexible to individual preferences.

The 2020 Technology Top Performer Study portrayed a very positive outlook for the non-cash reward and incentive travel business. The data consistently showed high levels of engagement, support, and spend with non-cash incentives among top performing technology companies. The study showed that Comparator companies were, in many cases, increasing their investments in incentives as well. While the use of non-cash incentives was likely not the sole cause of corporate success, there was a very clear relationship between the two. As companies achieved success in areas such as profitability, customer satisfaction, and employee engagement, they furthered this success through the implementation of successful reward strategies.

The data also showed that qualification criteria was changing as well. On one hand, more than 80% awarded incentive trips automatically, based on reaching some pre-defined criteria, rather than being chosen by a selection committee.  While automatic qualification was trending upward, so was the complexity of qualification criteria. Programs are more motivating if people know what they need to do to qualify for incentive opportunities and have both clarity and certainty about earning awards.

While the gaps between Top Performers and Comparators relative to the effective use of non-cash rewards was quite large in many areas, Comparators showed some improvement compared to the 2019 top performer data, including improved executive sponsorship. Comparators were trending upward in their engagement with incentive programs among the other verticals in the study as well, showing a rising tide in incentive use prior to the pandemic.

An area where Top Performers seem to really ‘get it’ is a greater recognition that ‘one size does not fit all’ when it comes to both non-cash incentives and incentive trips. While Comparators place the greatest emphasis on having widespread appeal, Top Performers recognize the value in personalization. It is not just about what something costs, or its equivalent cash value, but rather the personal appeal of the reward to the individual.

Incentive Research Foundation studies have shown that both participants and program owners are scrutinizing the value of incentive experiences more closely. Top Performers seem to have a better understanding and hold their programs to high standards. The fact that incentive flexibility represents such a high priority for Top Performers causes these programs to be more successful, thus motivating performance and perpetuating these companies as Top Performers in their class. Thus far, data collected by the IRF shows that incentive programs have not taken as much of budget hit as might have been expected during this time of economic upheaval. Keeping employees engaged and productive is particularly important at this time, particularly as large numbers remain working remotely. The progress shown by top performing technology companies relative to their effective use of incentives is encouraging and presumably, have shown enough of a return on investment to be seen as critical to business success in a technology industry that is essential for keeping our economy moving forward as our opportunity to interact with one another may be limited for a while. 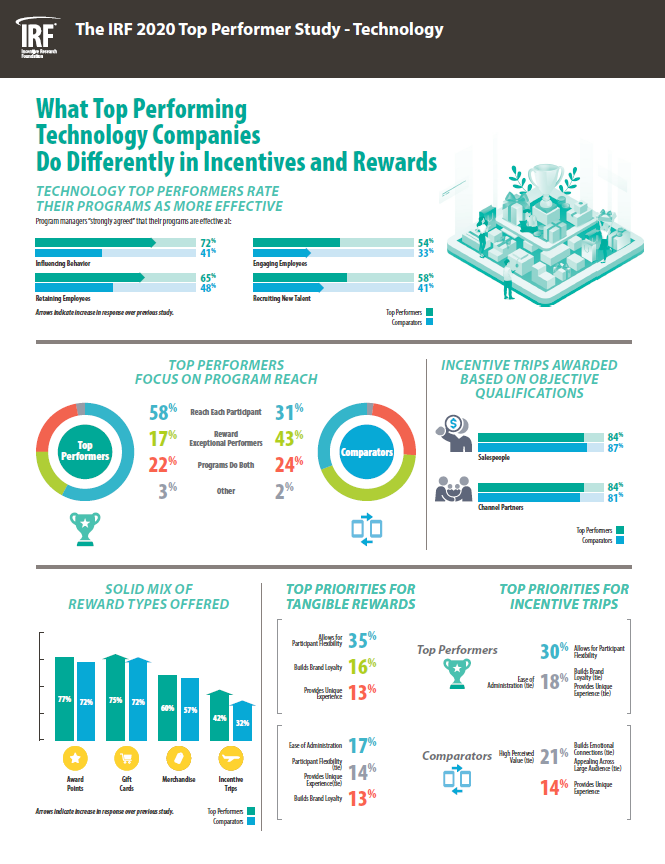